It’s not every day that a tropical island is home to a royal palace. However, Hawaii hosts the only royal palace in the USA. When I was planning my solo trip to Honolulu, I knew little about the history of Hawaii and the hardship they had to endure before becoming the 50th state of the United States. Yet, what intrigued me to take a visit at Iolani Palace is having an inside look on its tale of Hawaiian monarchy.

Before I took my tour, I was able to sit on a chair right outside the front door
of the palace and see the view of the city. It was remarkable to see the sophistication of the palace layout: there was a gazebo-like pavilion at the left side of the palace with tall, beautiful palm trees planted around the perimeters of the driveway. While I purchased my tour, I decided to take the audio tour since I wanted to explore the palace at my own pace, and I was pleased to know that I was able to carry my small backpack and DSLR around the historic home. 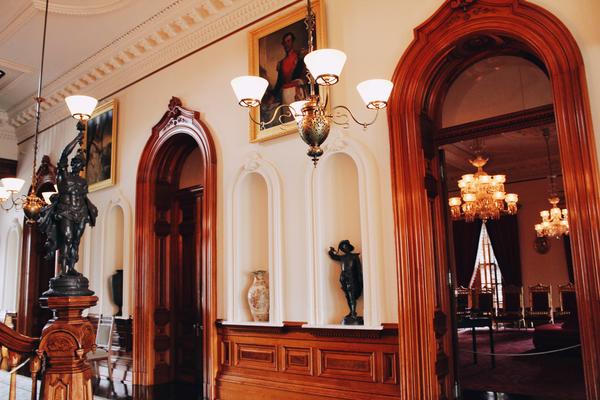 I did not know what to expect from the tour, but I was immediately in awe as I stepped directly inside the Grand Hall. It possessed all the qualities a palace should be: majestic, spectacular, and elegant. I was pleased to recognize the Hawaiian flair of the palace, from its floral rugs to its tropical designed vases. Above each vase, there was a portrait of the Hawaiian Kings and Queens who once ruled and resided at the palace. The rooms inside the Grand Hall led an open entrance of the State Dining room, Throne Room, and Blue room. The backside of the palace had an intricately engraved staircase that led to the second floor. The second floor had a similar design of the majestic entrance from
the Grand Hall. However, the rooms consisted of the King and Queen’s Suites, Music Room, and the Imprisonment Room. It was interesting to see how differently each room was designed. Out of all the rooms I toured, I enjoyed the Throne Room where they
hosted extravagant formal receptions, state balls, and diplomatic events. The royal
ambiance was suited by the matching crimson red velvet fabric furniture and rug,
and the chairs and counters contrasted with bright gold accents. I instantly
imagined myself being at the coronation night of Queen Liliuokalani with the room
filled with delegates and royal families from all over the world. I loved how each
room in Iolani Palace was filled with color, extravagant décor, and beautiful wall
and ceiling engravings of the palace plaque. 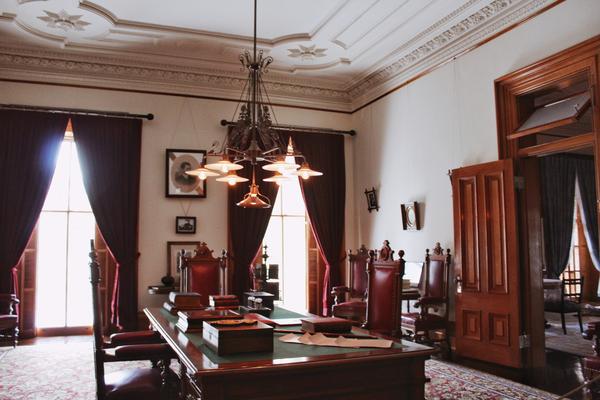 I was surprised at how fond I was when learning about the royal Hawaiian family. The personality of each ruler really shined in the decorative choices for each room. One of the rulers that had a great influence in the design of the palace was King Kalakaua. He was a patron for culture and arts and was open for modern inventions and amenities. It was interesting to learn that the palace had electric lighting (shortly after Thomas Edison’s invention of the light bulb), indoor plumbing, and an installation of the telephone. King Kalakaua was very open to Western culture and gadgets that he quickly adopted them as they were invented, being the pioneer for modern amenities being held in palaces and households. It was clear that the royal family valued entertainment and hospitality with the amount of parties, receptions, and music concerts they hosted at
the palace. It was common for royal events hosted in the palace to be accompanied with music and dancing. In fact, the majority of the rulers and consorts were musically inclined, often performing for their guests as they sang, played a variety of music
instruments, and composed music. The Hawaiian rulers’ appreciation of art and culture deeply expressed the value of family, hospitality, and love for all Hawaiians. 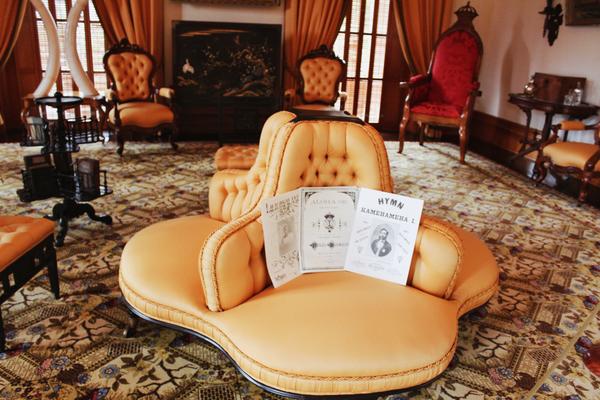 What left a lasting impression on my visit of Iolani Palace was the impact it left on our U.S. history. In 1898 it became a U.S. territory, and the U.S. began installing naval bases there to maintain control of the islands. In 1959, it became the 50th state to lastly join the Union. However, the Apology Resolution written in 1993, 100 years after bring overthrown by monarchy, expressed how unlawful it was to forcefully annex Hawaii. I was shocked at how deceitful the U.S. government was when planning the overthrow of Queen Liliuokalani. With the U.S.’s growing desire to fully control Hawaii’s sugar production, Queen Liliuokalani was targeted to be overthrown in interest for annexing the is land and its sugar farms.

Looking at the Imprisonment Room where Queen Liliuokalani was imprisoned gave me chills when I read the music she composed and the quilt work she created on display in the room. It deeply saddened me to read about her sorrows and humiliation, but I was also touched with how much she longed to bring peace and beauty to her artwork during her eight month-long imprisonment. The amount of strength Queen Liliuokalani had endured during that period made me gain so much respect to her and the royal family. 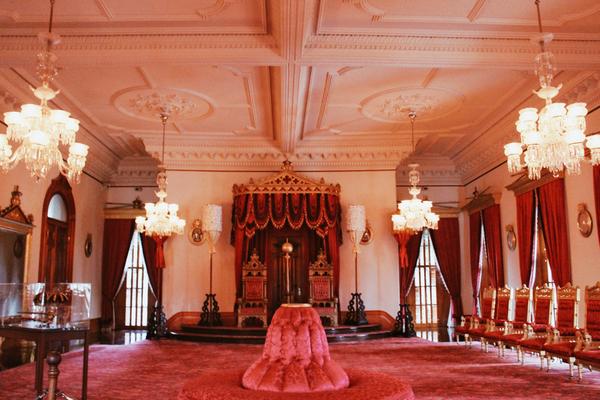 Iolani Palace gave me a taste of the royal life with its enchanting décor, dramatic history, and unique story. Although this tour in Honolulu didn’t consist of anything related to the beach life, it was one of the most impressive sights I have visited during my trip. Without this visit to the royal palace, I would have not have been deeply connected with Hawaii and its culture. If you ever visit Honolulu, I highly recommend visiting the modern royal palace that shaped the beautiful island of Hawaii.